In 1871, the year he published his first novel, James wrote to his friend, the editor and art historian Charles Eliot Norton: “I myself have been scribbling some little tales which in the course of time you will have a chance to read. To write a series of little tales I deem ample work for a life-time.” He would amply scribble a total of 112 stories and “nouvelles” (novellas), including such famous tales as “Daisy Miller,” “The Aspern Papers,” and “The Turn of the Screw.”

What James found attractive about writing shorter fiction was its implicit invitation to expand his horizons as a writer. Twenty years after he sent his letter to Norton, he wrote in his notebook “that by doing short things I can do so many, touch so many subjects, break out in so many places, handle so many of the threads of life.” He desired to leave a “literary heritage, such as it is, [that] shall consist of a large number of perfect short things, nouvelles, and tales illustrative of ever so many things in life.”

In “Brooksmith,” for example, he depicts the rise and fall of a butler, the type of man whom (as one critic puts it) “James’s social milieu normally considered beneath notice.” In spite of the story’s self-serving and unreliable narrator, James creates a sympathetic portrait of a man whose living is entirely dependent on his employer’s life. The story’s deceptively subdued prose masks—if barely—a critique of British class structure, and we present it in full as our Story of the Week selection. 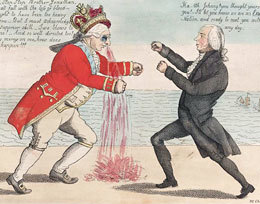 James Monroe, “The President in Peril”